Article, courtesy of Russell Coles from the UK

As the Dawes Kingpin didn't get exported in high volume, its possible that many users of this web site have not heard a great deal about them.  From a distance the Kingpin looks very like the Raleigh Twenty and has often been refered to as a 'Raleigh Twenty copy'. This is not true, as Dawes created a separable version of the Kingpin called the Newpin in 1964, 4 years before the  introduction of the Raleigh Twenty.  The Kingpin proper was released in 1965 in both folding and non folding varients.  The separable Newpin was quickly withdrawn and the Newpin name was then used for the single speed version of the Kingpin.  The non-folding versions were often branded as the KP500 or just 500. 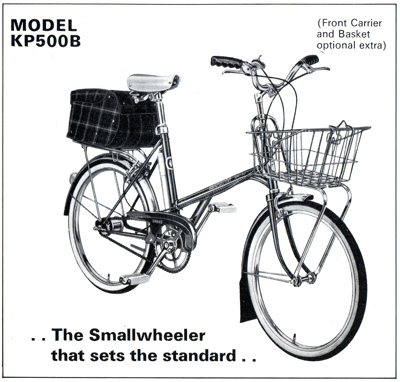 Whereas Raleigh is a large scale manufacturer of all sorts of bikes, Dawes have always been a significantly smaller operation concentrating on quality hand built tourers and road bikes (the Dawes Galaxy is probably their best known bike).  This difference is seen quite clearly when you examine the Kingpin and the Raleigh Twenty.  The Kingpin is constructed out of more slender tubing and has internal cable routing and has an elegant curved support at the head tube.  The ride quality is generally considered better on the Kingpin (more sporty if slightly less rugged feeling).

Many people look at the hinge and think its not as robust as the Raleigh Twenty hinge.  This may well be the case but that may be more a case of overkill on the part of Raleigh.  The hinges on many modern folders (including the Raleigh bikes that followed on from the Twenty) use this same hinge design. 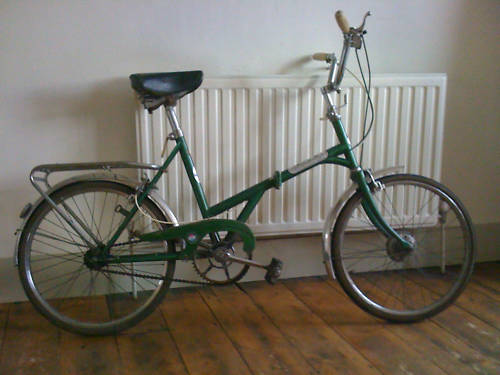 The good news for those of you that enjoy modifying bikes is that Dawes used standard threading.  Some Kingpins however have slightly inaccurate threading on the bottom bracket and may require some brute force to fit a new bottom bracket.  Most Kingpins use 500A wheels (ERTO 440) which are difficult to find tyres for.

I would recommend anyone who sees one of these bikes for sale to consider obtaining it.  They are an absolute joy to ride and in many cases are cheaper than a Twenty (outside the UK) due to the fact that people don't know much about them.          A Dawes Kingpin as sold on eBay.

Be aware however that around 1985 the Kingpin design was changed to make it fold better, the hinge was moved back toward the seat tube and the rear diagonal support was removed to make room. There is currently also a current model Dawes Kingpin which is a manufactured by Dahon.

Links and other information:

Click here to see a whole gallery of Kingpin and Newpin pictures.

This article is still a work-in-progress, as there is not a lot of information currently available. If you own a Dawes Kingpin or Newpin, please get into contact with us so that we can add to this article and provide a more complete history of this interesting little bicycle.

A Selection of Dawes Kingpins from the Galleries: A Kingpin as purchased on Ebay, 2013. Take a closer look at the refurbishment and customisations done in this gallery.